The Bull-headed Shrikes (Lanius bucephalus; 20cm in body length) are small birds found all over East Asia. In Japan, they commonly inhabit in grasslands and scrublands. They eat small animals such as insects, frogs, lizards, small birds and rats, and sometimes even prey birds larger than themselves. Because of their high hunting ability, they are also called “a small hawk”, and for smaller birds, they are the greatest enemy. The color pattern is somewhat different between male and female: white spots on the wings and dark black eye-stripes for males (not seen in females). The meaning of their name in Chinese characters is “hundred-tongue”. It represents their talent for mimicking other birds’ songs in the spring. In the autumn, each bird claims its territory for wintering, and makes territorial calls (a high-pitched cry) at places that are easily visible such as at the top of withered trees. It is a common wild bird that can be easily seen in agricultural land and parks and has been a long-studied species in Japanese ornithology.

Although shrikes are familiar birds, there are surprisingly few Japanese paintings that depict them. Among the very few, there are two works that I would like to assert as the greatest masterpieces in Japanese painting history. The first is “Shrike Perched on a Dead Tree” by “Samurai” Miyamoto Musashi also known as Niten (Kuboso Memorial Museum of Arts, Izumi). A long twig extends smoothly in the center of the vertically long screen, and there is a mature male shrike at the top of the twig. The bird is presented simply with the shading of the black ink, but the form and color pattern (white spot on its wing and black eye-stripe) are extremely realistic. He has a s trong sharp gaze, as if searching for a prey. Some say he does not notice the caterpillar crawling under his feet, but I think he has no interest in the caterpillar at all. He is aiming for something much bigger, and you can very much feel his hunting intent. It is a masterpiece which can be drawn only by a legendary Samurai who repeatedly fought in countless battles. 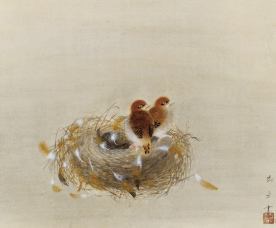 The second is “Mozu” (Yamatane Museum of Art) by Hayami Gyoshu. They might be picked up from the yard or the nearby bush, two uneasy chicks perching on the rim of their nest. They have baby faces, and the feathers on their wings and tail are not fully grown yet. From these details, it can be inferred that the chicks are at a pre-stage of their nest-leaving that parental care is needed still. Both are staring in the same direction under this unexpected circumstance, full of anxiety and helplessness as waiting for their parents. The feathers scattered in the nest are those of eaten small birds. These further emphasize the anxiety and helplessness of the chicks. It is truly the artwork by the artist who is known as both realism and symbolism.

How is Seitei’s shrike like? In this painting, a male adult shrike is perching on a thick withered tree with grapevines. The season is late autumn judging from the withered leaves on the ripened wild grapes. The form and color pattern are painted in perfect realism: the sharply curved hawk-like beak, slender tail, its characteristic black eye-stripe, white spot on the wing, and thin black legs, etc. The body is thick and strong, and the feathers on the head and abdomen seem soft and plump. If you hold a shrike in your hands, you can know his strongness and softness. It can therefore be said that Seitei’s realism which expresses the texture and weight of the bird realistically goes beyond the conventional level.

Then, how much greater is Seitei’s shrike? Is it better than the two artworks I mentioned above? First, I’d like to compare Seitei’s shrike with Musashi’s. In both, the male adult shrike is perching on a withered branch. Although the direction of its face and body are opposing, the two layouts are quite similar. They are both at the highest level of realism. However the expression of the shrike and overall impression a requite different. The eye of Seitei’s shrike is gentle, and the artwork creates a calm atmosphere. Negatively speaking, his shrike lacks tension, hunting intent, and the aggressiveness to defend its territory. He is merely perched on a branch without any motive of action. In contrast, Musashi’s shrike has a look of menace, and the atmosphere is filled with a determination to kill. His tail is curled inward, and he balances himself at the tip of the narrow branch using his tail. He is preparing to pounce on his prey at any moment. It can be said that Seitei’s shrike has stillness, while Musashi’s shrike has vividness. This is a close competition, but I would like to give more credit to Musashi’s expression of aggressiveness and motion.

Next, let us compare Seitei’s shrike to that of Gyoshu’s. In this case, it is difficult to compare for the subjects are quite different. Seitei’s shrike is an adult male, but Gyoshu’s shrikes are youngsters prior to their nest-leaving. The overall layout and circumstances are very different too. Then, I would like to focus on the depiction of the feathers. Firstly, Gyoshu’s shrikes are relatively flat. We can’t see their strongness and softness. This may be the result of trying to draw according to the traditional aesthetic sense which is to be seen in later Japanese painters such as Higashiyama Kaii and Hirayama Ikuo. In contrast, we can see the strongness and softness in Seitei’s shrike. It can be interpreted as Seitei’s challenge to the traditional style of Japanese paintings. Thinking of that, I’d like to say that Seitei’s shrike is better.

In conclusion, Seitei’s artwork is just as good as the other two masterpieces. My future dream is to line them up and observe all three of them together. There may be a discovery of a new side of shrike previously unknown in ornithological research.

This year celebrates 125th anniversary since birth of Hayami Gyoshu.
In commemoration, there will be special exhibition at Yamatane Museum.
The painting “Mozu” featured in this essay will be on view along with 120 pieces of
Yamatane Museum’s collection.
This is a great opportunity to see the astonishing collection of Gyoshu’s pieces.

*Works other than Ryoshu will not exhibited