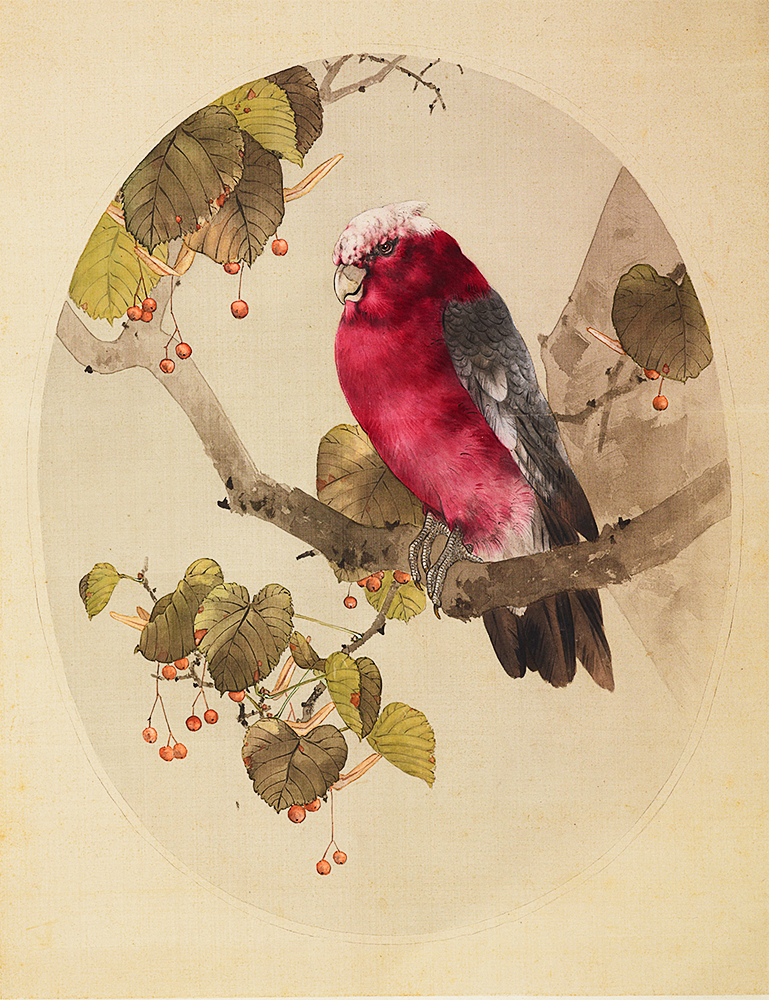 So far in this series, I have discussed how Seitei has painted a variety of birds. While I have confirmed approximately 40 species, all of these birds are actually local to Japan. Considering how Seitei’s contemporaries, as well as Kano Eitoku of the 16th century Azuchi–Momoyama period and Ito Jakuchu of the 18th century Edo period, have painted foreign birds, Seitei’s stubbornness is unusual. I eventually came to the conclusion that “Seitei chose not to paint foreign birds.”

For these reasons, this work is exceptional. Illustrating a Galah, a medium sized cockatoo native to Australia, this is the only work by Seitei that I know of that depicts a foreign bird. One should note, that although cockatoos and parrots are close relatives, they are different, since cockatoos have crest feathers and parrots do not. Despite being called a parrot, the Galah is a cockatoo with a small crown. (Its Japanese name mistakenly refers to the Galah as a parakeet.) In this work, the Galah is depicted with the realism of its bright and rose-coloured body, pale crest, large beak and two pairs of front and back-facing toes. It is likely that Seitei used primary observation when depicting the bird.

This work is from a design Seitei crafted for the Cloisonné Medallions of Flowers and Birds of the Four Seasons; a series of 30 works meant to decorate the State Guest House of the Akasaka Palace. These cloisonne enamel plaques made by Namikawa Sosuke are placed front and centre in Kacho-no-Ma (the Flowers and Birds Room). The remaining 29 plaques all depict birds, with 27 plaques illustrating birds local to Japan and the other 2 presenting domestic birds (a pigeon and a chicken). Naturally, in depicting the only foreign bird, this work stands out even among the other brilliant works.

Why did Seitei paint a foreign bird? Moreover, of all, why a Galah? Keeping in mind all 30 works, I would like to examine what prompted Seitei’s decision.

Let me begin by dividing the 30 works into four seasons. I will analyse each bird and each surrounding vegetation, and infer the season based on their distribution, ecology, their appearance and condition. In addition, I will also refer to Seitei’s other works. The seasons are categorised accordingly, spring as March to May, summer as June to August, autumn as September to November, and, finally, winter as December to February. For instance, in one work, a Daurian Redstart (a winter bird) is depicted with a peony (a spring flower), however, because this bird is often seen during early spring, I would qualify this as a spring work. With the case of another work with five Plovers and no vegetation, one can reason from similar works, like “Birds and Flowers of the Twelve Months” (Private Collection) where a plover is represented as November and the set of twelve hanging scrolls “Chidori” (Private Collection) as October, that this is an autumn work. When categorizing these 30 works, 5 would be spring, 7 are summer, 12 are autumn, 4 are winter and 2 are unknown. Among these works, the majority are autumn seasoned and, since the linden tree bears some small fruits, this work, too, would be autumn.

Next, let’s divide these works further by the associated primary colours of each bird. For example, while the Great Spotted Woodpecker is mainly black and white, it will be designated red because of the striking red sections of its head and hips. In the case of the Eurasian Teal and the Baikal Teal, their distinct facial colours would designate them respectively as orange and yellow. In contrast, while the Common Moorhen has a distinct red beak, I will label it a black bird. Considering how most Japanese birds are plain, when categorizing these works, modest brown birds made up the majority with 10 works. From this, 8 were depicted in autumn (of the 12 autumn works), which featured red and yellow vegetation. The 2nd most common colour was orange (5 works), 3rd was black (4 works), 4th was green (3 works), and tied for 5th place was red, yellow, blue, and white (all 2 works).

Here, I’d like to highlight the so-called warm colours of red, orange and yellow. In each set of spring, summer, and winter works, at least one or two works contained a bright and warm coloured bird. This, however, changes with autumn. I have referred to the Varied Tit as an “autumnal orange bird”, however, in this work, the bird’s orange colour is almost fully hidden by its grey back. While the real Varied Tit’s orange colour is highly noticeable, would it be right to call this Varied Tit an “orange bird”? If you were to only look at the work, the bird would be classified as grey or black. In which case, bright and warm coloured birds are lacking in these autumn works. All birds are plain brown, and the vibrant autumn vegetation works to substitute this absence of colour. As such, for balance, I believe there was a need for Seitei to depict at least one very colourful bird. Since blue birds represent summer and orange birds feature in other seasons, perhaps what was missing was a vibrant red bird that is not depicted in any of the remaining 29 works.

There are a few vibrant red Japanese birds. Possible candidates include finches, such as the Common Redpoll, the Pallas’s Rosefinch, the Long-tailed Rosefinch and the Red Crossbill, however, the first two are rare winter birds and the latter two are uncommon and rarely feature in Japanese paintings. Since these birds would be far from Seitei, foreign birds may have been the next logical option.

Additionally, Akasaka Palace itself may have influenced Seitei’s choice to paint a foreign bird. Originally built as a Togu Palace, residence for the crown prince, Emperor Taisho, Akasaka Palace might have an added function of welcoming foreign visitors. In this case, while its decor may appear Western, its details should reveal essentially Japanese features, such as Japanese flowers and birds. However, the depiction of only Japanese birds may not have been appropriate. While it was important to convey Japan’s charm, it must have also been important to present Japan’s openness towards accepting foreign cultures. I am sure this is the reasons why Seitei chose this foreign bird.

It is often said that Seitei’s works are valued more in places especially like Europe and USA than in Japan. Many of Seitei’s works have made their way overseas and continue to be displayed in famous museums. Meanwhile, the 30 cloisonne works have now settled in Akasaka Palace, one of Japan’s National Treasures, and continues to play the role of welcoming foreign guests. One cannot possibly fully understand Seitei’s works without addressing their inherent internationality in, both, the past and in the present. 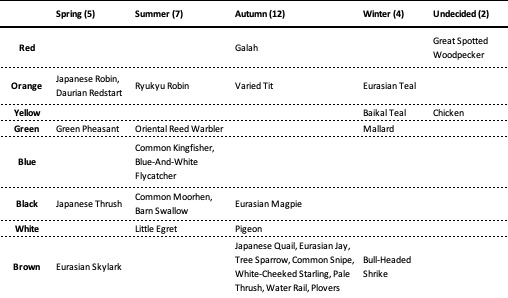 Dates: 2021/03/27 (Sat) to 2021/05/23 (Sun) *This Exhibition has Ended
Venue: The University Art Museum, Tokyo University of the Arts
https://www.geidai.ac.jp/museum/exhibit/current_exhibitions_en.htm
※Advance reservations are currently not required, however, depending on circumstances involving the coronavirus, details may be subject to change. As such, please check the official exhibition site for the most recent updates prior to your visit.
Address: 12-8 Ueno Park, Taito-ku, Tokyo, 110-8714
NTT Hello Dial: +81 (0)3-5777-8600