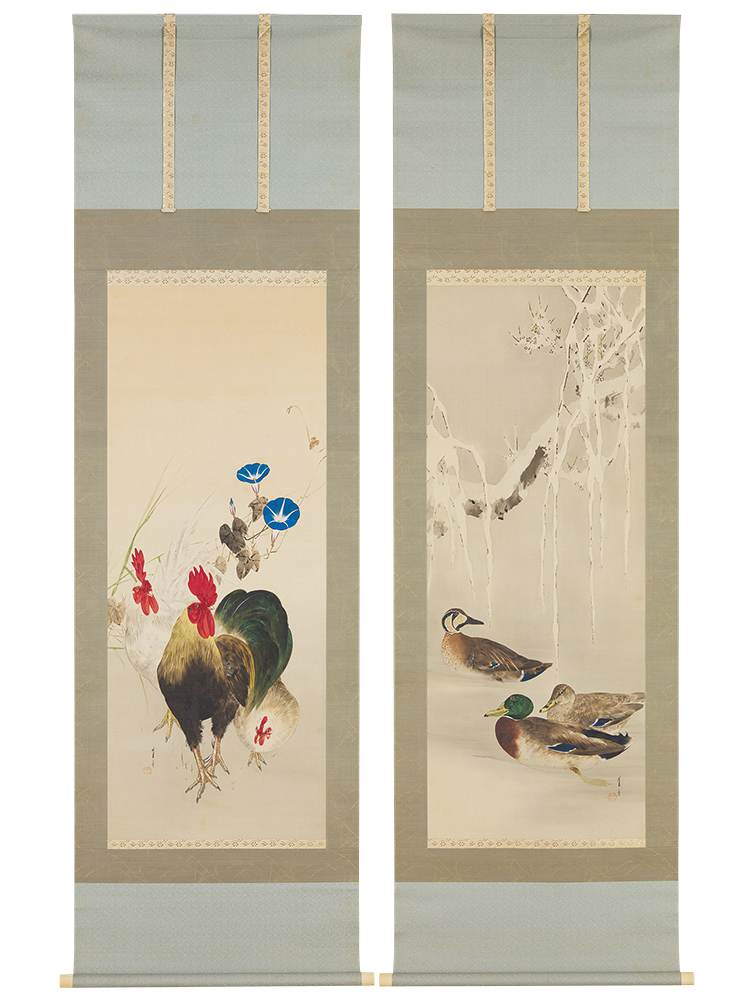 There are about 130 species of ducks in the world, and they are roughly separated into freshwater (dabbling ducks) or sea ducks (diving ducks). As the name implies, the former live mainly in freshwater areas such as rivers and lakes, and the latter mainly lives in brackish and sea waters such as estuaries, brackish lakes, coasts, fishing ports, and offshore waters, but, in fact, many of them live interchangeably, especially the sea ducks. The former is described as a floating bird and mainly consumes surface-level and water-based plants (such as gleanings, aquatic plants, algae, etc.), while the latter is a piscivorous diving-bird with a diet that includes shellfish and small aquatic lifeforms. Several species of sea ducks, such as mergansers, have elongated beaks and spindle-shaped bodies, which helps them catch fast-swimming small fish easily. Ducks tend to be thought of as living in the same way or form, but each species lives a various life.

Including Mandarin Ducks, most ducks depicted in traditional Japanese paintings are freshwater ducks. The most commonly depicted ducks would be the Mallard and Eurasian Teal, then the Northern Pintail and Eurasian Wigeon, and, rarely, the Falcated Duck and the Northern Shoveler. Strangely, the most common and populous species of duck, the Eastern Spot-Billed Duck is hardly seen in Japanese paintings. Perhaps it’s only recently that I’ve come across so many in my immediate vicinity. On the other hand, sea ducks are quite rare and, so far, I’ve only seen them in a few works. For instance, I was quite excited to find the Common Goldeneye in “Ducks and Snow-Covered Pine Trees” (Ogata Korin, Okada Museum of Art), the Common Pochard and Smew in “Hibiscus and Ducks” (Oki Ichiga, The Tottori Prefectural Museum).

Of course, Seitei also painted ducks, however, as a bird-and-flower painter, this number of works is surprisingly small. As far as I know, there are several pieces that depict the Mandarin Duck, Mallard, Eurasian Teal and a few other freshwater ducks, but there are almost no sea ducks. This work, which I will discuss, is a valuable piece, that depicts a fourth species of freshwater duck. Three ducks are drawn here, and the two in the lower right are a pair of Mallards. One to note is the male Baikal Teal in the upper left.

The Baikal Teal is a small duck that lives only in East Asia, and flies to Japan mainly in the winter to the lakes and marshes by the Sea of Japan. They are often seen alone or in other duck groups, but their large flock is very rare. They used to be a common specifies, but now they are perceived as quite unusual and listed as ‘Vulnerable’ on the Red List of endangered species by the Ministry of the Environment. The beauty of their colorful feather and peculiar facial pattern on their face inspired, both, their Japanese name and many artists. In addition to the aforementioned work, “Hibiscus and Ducks”, there are many other works that depict the Baikal Teal, such as Maruyama Okyo’s “Waterfowls and Chrysanthemums” (The Kyoto National Museum) and “Koi Fish and Ducks” (The Matsuoka Museum of Art), as well as Imao Keinen’s “Reeds and Water Birds” (The Museum of Modern Art, Shiga). Perhaps they are an essential subject of bird-and-flower paintings.

The precision and detail of Seitei’s depiction of the Baikal Teal is breathtaking. Their face pattern consists of two yellow parts and one green part, and its feathers including the top of its brown head are expressed with fine black lines. The boundary of their face pattern is separated by a thin white line, and this line is clearly seen in real Baikal Teals as well. Exemplifying great detail, their eyes are colored by a brown glow within a dark brown eye-ring, and their black pupils are highlighted. From their back to their chest, they carry a smooth brown gradient with small black spots on their chest. This scattered aesthetic is very close to the real bird. The orange wing covert and green speculum (the shiny part of the secondary flight feathers) are clearly outlined, and some of them are colored blue to express the brilliance of the speculum. Their position seems to be drawn considerably forward, but the other wing feather depiction is very accurate. The three-color shoulder feathers, which are another of its features, are elongated from the back are particularly long. The number of feathers is faithful to the real bird. The lower armpits of the wings are partly gray, but have some brown stripes. This means that the eclipse feathers (see vol. 23) remain, and correctly capture the seasonal transition of eclipse feathers to breeding plumage in early winter. Their tail is brown and short, and the rear should be black but painted blue, which may have been a way to express the feathers’ luster.

The birds Seitei paints are always precise, however, not many come as close to the real thing like this Baikal Teal. I think Seitei had a special fondness for the Baikal Teal and, as such, put extra energy into the making of this work. Perhaps the excitement of meeting a wild Baikal Teal outdoors inspired him to make the work as real as possible. Meeting this beautiful bird must have been a special memory, both, now and in the past.

vol.26｜Final Chapter
In Opposition to Ito Jakuchu: Mandarin Ducks in the Snow