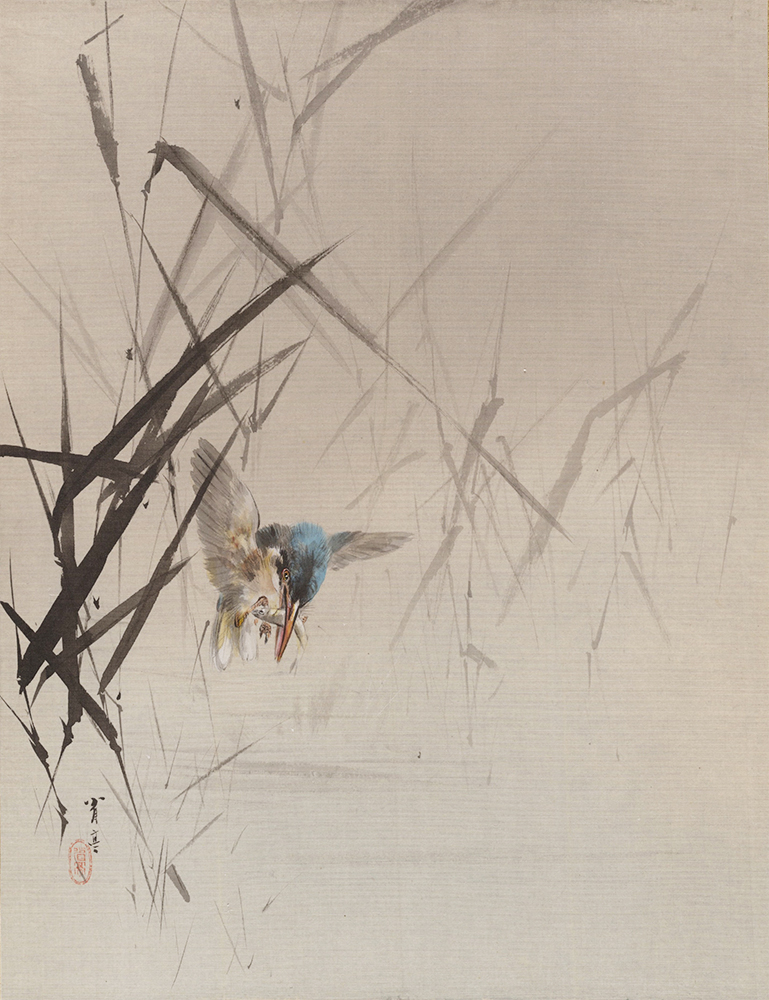 vol.30 A Strange Yet Popular Being: Bird Catching Fish Among Reeds

The Common Kingfishers are very popular birds. Adored to a great degree by photographers, it’s not unusual to see a single kingfisher encircled by dozens of high-performance cameras. Personally, I’m not a big fan of Common Kingfishers, but I understand their popularity. Firstly, their “cute figure”. Due to their large head and beak, short legs and tail, their head seems to make up one-third of their body. Their body proportions are the same as a human baby, and we have evolved to make associations between this bodily ratio and cuteness. It’s the same reason why characters like Hello Kitty are seen as cute and popular.

Secondly, it’s their “distinct color scheme”. Their cheeks, chest, stomach, and feet are a vibrant orange, and the section from their crown to their back, wings, and tail are bright blue. As such, no matter how dreary their surroundings, the kingfisher’s presence will always light up their landscape and emerge as the main character of the work. Furthermore, since they are almost the same balance of orange and blue, their most prominent color depends greatly upon their angle. It’s orange from the front, blue from the back, dual-colored from the side, and its changing expressions are also charming. Above all, their “electric blue” is their most notable trait. In particular, the radiant blue that runs through its back is a structural color that radiates through the light reflected from its feathers. Truly, the irritable charm of this blue glow cannot be overstated.

Common Kingfishers have been popular throughout history and, while infrequent, they have long been a subject of Japanese paintings. While this is entirely my assumption, I believe the number of kingfisher paintings has increased over the mid-Edo period. Regardless, none of these early works impresses me. Works like Maruyama Okyo’s “Kingfisher and Trout” (Fukuda Art Museum) and Okamoto Shuki’s “Birds and Flowers” (Tokyo National Museum) are entirely unrealistic and completely unsatisfying!! In ukiyo-e works like Katsushika Hokusai’s “Kingfisher with Iris and Wild Pinks” and Utagawa Hiroshige’s “Kingfisher and Hydrangea”, the kingfisher’s deformed body is almost monstrous. I don’t know why, but kingfisher paintings have been unrealistic for a long time. It was only until the end of the Meiji period, with works such as Hayami Gyoshu’s “Kingfisher” (Jukichi Komagata Memorial Art Museum) and Hashimoto Kansetsu’s “Kingfisher and Rapids” (Yamatane Museum of Art), that more realistic depictions emerged. By this point in time, I can finally find works I can appreciate with ease.

Now, how did Seitei, who valued realism, do in his depiction? His kingfishers are best represented by this work and “Cloisonne Ware (Kingfishers with Willow)” (Tokyo National Museum) from the Kacho-no-Ma room of the Akasaka Palace. Based on these two works, let us assess the realism of his kingfishers.

The overall balance of both works is accurate. Their heads are proportioned correctly, making up one-third of their body, and their wings to body ratio are mostly correct. However, there is a large difference in the details of these works. Although “Cloisonne Ware (Kingfishers with Willow)” is nearly perfect, this work is inaccurate. Firstly, male kingfishers’ beaks are black and female kingfishers have upper-black and under-red beaks, however, this bird’s beak is red all over. Furthermore, the nose holes at the base of its beak are too large and positioned inaccurately. In addition, the kingfisher lacks the orange feathers that typically surround its eyes. Above all, the orange of its chest, stomach, hips, and underside of its wings is sparse and lacks the kingfisher’s characteristic striking color contrast. Furthermore, while Seitei is skilled at conveying the soft texture of feathers in his paintings, it also blurs the form of the bird and detracts from the realism of the work.

In contrast, this work excels at reflecting the kingfisher’s correct ecology and behavior. A reed bed is placed in the background, and a water surface can be found in the lower right section of the composition. This is a habitat where real kingfishers live. In addition, this kingfisher is depicted with a small fish in its mouth and is flying close to the water. Perhaps it was caught moments right after flying into the water, catching a small fish, then leaping out. Although the rest of the composition appears stagnant, this bird seems to be in motion, and you can really imagine its movements in sequence. How could Seitei, a painter from the Meiji era, paint such a fleeting scene, one that can only be captured by modern high-performance cameras, with such accuracy? It’s impossible not to give him credit for his power of observation; in particular, his precision and ability to discern subtle movements. In contrast, resting on a suspended willow branch and spreading only one wing, the kingfisher in “Cloisonne Ware (Kingfishers with Willow)” appears unnatural. While the details of this work are accurate, this kingfisher appears lifeless and inanimate. These works have completely juxtaposing strengths and weaknesses.

Seitei was born at the end of the Edo period and was active during the Meiji and Taisho eras. In this transitional period, realistic depictions of kingfishers increased amidst a mixing level of depictions. Among this historic time, Seitei may have held, both, old Edo period-inspired and new, foreign-influenced sensibilities. The former sentiment dwells in “Bird Catching Fish Among Reeds” where, instead of focusing on the realism of the details, he chose to capture a moment in time. The latter emanates through “Cloisonne Ware (Kingfishers with Willow)”, where Seitei chose fine details over naturalism. In turn, what these opposing kingfishers might signify is Seitei’s own polarized sentiments.