What does “realism” mean? According to the Japanese dictionary, this means “portraying things in words and paintings as they are” , and in terms of a painting, this would be “to draw accurately as it is” . I have discussed and praised the realism of Seitei’s birds in previous essays. That is because he depicts birds accurately in an ornithological perspective. Accuracy is a characteristic that is integral to Seiter’s birds-and-ﬂowers paintings, however, in this essay I would like to discuss a work that makes us question the extent of Seitei’s realism.

The bird painted in this work is an egret. Egret is the general term used for a heron with white body, so ornithologically-speaking there is no such a species called a “white heron” . In Japan, you can find the Great Egret (Ardea alba), the Intermediate Egret (Egretta intermedia), the Little Egret (E. garzetta), and the Cattle Egret (Bubulcus ibis), which all have very similar appearances. Identification points are the size and shape of their bodies, the color of their beak and leg, and whether they have crown feathers or not. Egrets can be distinguished by the correct combinations of these features. The Great Egret is literally the largest and the strongest, the Intermediate Egret comes next, and lastly the Little Egret and the Cattle Egret are the smallest. The Great Egret and the Intermediate Egret have different colors of beak in every season: black in summer and yellow in winter. In contrast, the Little Egret has black beak and the Cattle Egret has yellow beak all-year-round. They all have black legs, except the Little Egret, which has yellow toes. Moreover, the Little Egret is the only variant that has long, slender crown feathers. As you can see, the identification of egrets is quite complicated and, for birdwatchers, one must be at an intermediate level, with a certain amount of knowledge and experience, to be able to identify the difference between these birds. 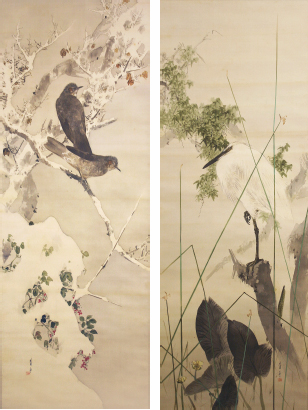 In consideration of these diffculties, let us reexamine Seitei’s egret. Due to his love of birds, I will proceed on the premise that Seitei would have been highly aware of these distinguishing features. Seitei’s egrets have some common features among his multiple works, i.e. “July in Flowers-and-Birds of the Twelve Months” (private property) and “Green Maple and Egret, Bulbul in the snow” (Saita Museum). In such works we may identify three key features: (1) Their beaks are black, (2) their crown feathers are long and slender, and (3) their legs are black all from the base to the fingertips. Judging from points (1) and (2), the egret in this painting seems to be a Little Egret. In addition, although it is a minor distinction point, the color and shape of the exposed part of the skin from the mouth to the eyes are also important, and these are also very similar to a Little Egret. The problem, however, lies in point (3). Yellow toes are a major feature of the Little Egret, but this egret’s toes are obviously black, which contradicts the Little Egrets characteristic feature. In other words, by combining the body of a Little Egret with the legs of some other egret, Seitei depicts a “chimeric” egret. As this fantasy that does not exist in reality, although each part of the body is illustrated realistically, the painting is not realistic because the egret does not have ornithologically correct features.

Why did Seitei paint such an egret? He could have easily made it realistic, but why did he choose not to do so? I believe it is because Seitei was an artist who pursued artisticity over realism. In illustrating an egret, the Little Egret would be an ideal model. Since they are familiar birds, there are many opportunities for observation and, furthermore, their long and slender crown feathers make the Little Egret an excellent decorative bird. On the other hand, because the yellow toes will stand out on the soft and calm screen, if its toes were painted in yellow, viewers will focus on the yellow toes first and the presence of the egret will fade. Thus, knowing that it is not accurate, Seitei intentionally painted the toes in black. As a result, the white heron became “chimeric” but its presence and the work’s artistry was preserved.

There is no doubt that the majority of Seitei’s works have outstanding ornithological reality. However, we should not evaluate Seitei’s work solely from its realism. Reality and artistry are not always able to coexist, and artists sometimes need to sacriﬁce realism for art. In these cases, instead of condemning them as “wrong illustrations” , these works should be evaluated positively, as being “painted diﬀerently with intention” . Numerous paintings by Seitei have been on the borderline between reality and artistry.

The museum introduced in this essay