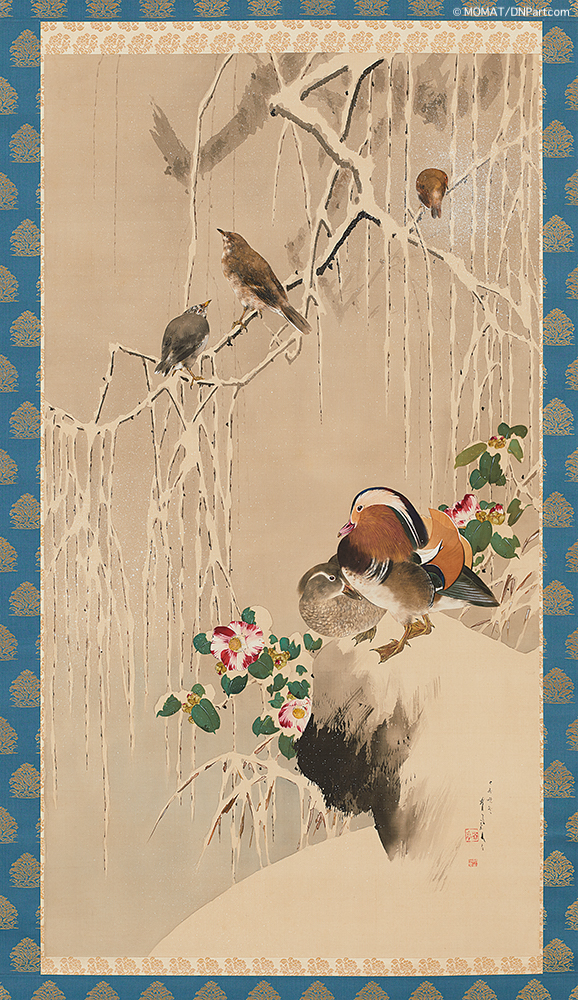 vol.26｜Final Chapter In Opposition to Ito Jakuchu: Mandarin Ducks in the Snow

In recent years, Ito Jakuchu has become enormously popular. His works are full of an aesthetic charm that is familiar to present audiences, such as shining colors, skillful paint application, highly meticulous detail, and references to a multitude of artistic genres. Of course, I also love Jakuchu. I get excited seeing roosters that resemble kabuki actors, laugh at Buddhist paintings replaced by vegetables, and am overwhelmed by “Doshoku sai-e” (30-scroll set of the Colorful Realm of Living Beings) (The Museum of the Imperial Collections, Sannomaru Shozokan). I believe he is one artist in Japanese history whose unique personality never fails to disappoint viewers.

However, I might not be able to agree with the general public’s view of Jakuchu. I strongly agree with the high evaluation of his detailed depictions and original forms expressions. However, I am in direct opposition to describing it as “realistic”, especially when regarding his bird-and-flower paintings. His bird-and-flower paintings indeed look realistic. Nevertheless, while some are indeed unmatched in accuracy and detail, others, when view carefully from an ornithological perspective, are completely mythical as the form and the feather color vary greatly from the real thing. I think he was a painter whose work differed greatly between when he modeled his subject after the real thing and when he did not. Because he was the owner of a large greengrocer, it might have been easy to obtain birds farmed for food, such as chickens, geese, ducks, etc. There must have been many opportunities to view the real thing up close, including rare foreign birds such as cockatoos and parrots. These birds are indeed drawn with accuracy. On the other hand, others, especially small birds, are not accurate in their depictions even though they are not rare, and for some, it is even hard to determine what bird he drew. It is as though he didn’t intend to draw it like the real thing from the beginning. As Tsuji Nobuo rightly described Jakuchu as “kiso” (eccentric or independent), he was ahead of his time in placing value on abstraction and creativity over realism. I think this mixture of reality and fantasy misleads the true evaluation of his bird-and-flower paintings.

How did Seitei, a later flower and bird painter, evaluate Jakuchu, the radical pioneer? This work clearly mimics one scroll from the Doshoku sai-e, “Mandarin Ducks in Snow” (The Museum of the Imperial Collections, Sannomaru Shozokan), and directly expresses his thoughts. They are almost the same in subject and composition, but I would like you to compare them very carefully. A common theme that they share is the male and female mandarin ducks drawn against a winter waterside scenery with piles of snow. (There is a notable difference whereby in Jakuchu’s version the female is on the water surface, while in Seitei’s version she is on the ground beside the male.) Pay attention to the three small birds on the tree above. From the left, Jakuchu depicts the Narcissus Flycatcher, the Oriental Turtle Dove, and the Siberian Rubythroat. In contrast, Seitei replaces that with the White-Cheeked Starling, the Pale Thrush, the Hawfinch (I can’t say for sure because its characteristic features are not clear). Why did Seitei change the three small birds with completely different ones, and what on earth did he dislike about them? Here, Seitei’s thoughts on Jakuchu become very evident.

From an ornithological point of view, I didn’t like the Jakuchu version very much. In Kyoto where Jakuchu lived, the three bird types seen in Jakuchu’s version are a summer bird (the Narcissus Flycatcher), a nonmigratory bird (the Oriental Turtle Dove), and a traveling bird that passes in spring and autumn (the Siberian Rubythroat). In other words, the Oriental Turtle Dove is fine, however, the Narcissus Flycatcher and the Siberian Rubythroat would not reside in winter! I believe Seitei must have thought the same. Jakuchu has little understanding of the ecology of birds. Even though his style of painting is described as “realism”, it is strange that there are the Narcissus Flycatcher and the Siberian Rubythroat in the snowy winter landscape of Kyoto. I’ll show you exactly what realistic bird-and-flower painting is! That is what Seitei may have thought as he placed the White-Cheeked Starling (nonmigratory bird), Pale Thrush, and Hawfinch (both, winter birds) instead.

【A Note of Gratitude】
Many of you have followed this essay series avidly since its launch 3 years ago in 2019. Sadly, this essay will be the final volume of the series.
Thank you to all the passionate readers who took the time and care to read each month’s essay.

【A Comment from the Author】
This series, which began in January 2019, will conclude this month. Thank you all for taking the time to read them during this span of time. The three years I faced Seitei each month was a great learning experience for me as well. I would like to continue exploring the works of Seitei and look forward to discovering new birds.
– Dr. Masao Takahashi