Pheasant’s family (large and medium sized species of Phasianidae) are mainly distributed in Asia, and have been popular through all ages and countries due to their unique and flashy attire of adult males. Although, in Japan, only two endemic species (the Green Pheasants Phasianus versicolor and the Copper Pheasants Syrmaticus soemmerringii) inhabit, many other species inhabit in mountainous areas of East and Southeast Asia including China and the Himalayas, which is why they have been one of the major subjects in Chinese paintings. In Japanese paintings, various pheasants including foreign ones have frequently been painted under the influence of Chinese paintings. 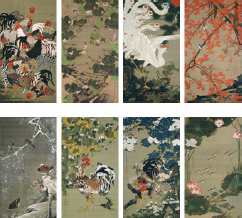 For example, the Golden Pheasants (Chrysolophus pictus; 90cm in body length), the representative of China, have golden head and waist, and gorgeous scarlet belly, and inhabit in mountainous areas of China. They are painted and gained outstanding popularity in many artworks such as “Golden Pheasants in Snow” in the series of “Colorful Realm of Living Beings” by Ito Jakuchu (Museum of the Imperial Collections) and “Waterside Willow and Two Pheasants” by So Shiseki (The Museum of Shiga Prefecture Biwako-Bunkakan). The Silver Pheasants (Lophura nycthemera; 90-130cm in body length) also live in the mountainous areas of China, and have a white neck, back, and tail, which contrast sharply with their dark blue belly. A good work, “Silver Pheasant and Golden Pheasant” by Okamoto Shuki (Tekisuiken Kinen Bunka Shinko Zaidan) depicts these two in contrast. The Copper Pheasants (125cm in body length) inhabit in the forest areas of three main islands (Honshu, Shikoku, and Kyushu) of Japan, and have bright red-copper body and characteristic long tail. “Copper Pheasant and Plum Tree” by Kano Sansetsu (Tenkyuin Temple, a subtemple of Myoshinji Temple) and “Copper Pheasant on a Pine Tree” by Azuma Toyo (The Sendai City Museum) show an adult male with long tail resting on a tree. In all those works, these pheasants are painted as a main subject: they are stars in the genre of “flower and bird paintings”. 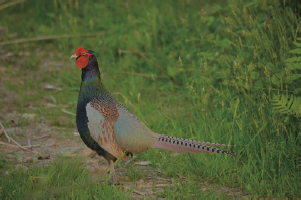 However, it seems that there are not so many Japanese paintings which depict the Green Pheasants, the national bird of Japan. The Green Pheasants (80cm in body length) inhabit in farmlands and wastelands of Honshu, Shikoku, Kyushu, and many live near villages and towns: they are very familiar bird. They have a red face, shining green body, and a slightly long tail. The form is attractive enough to be a subject. However, it seems that painters had avoided painting pheasants by the end of Edo period; there are only a few good works such as “ Cherry Blossom and Pheasant in Spring Rain” by Kakizaki Hakyō (Hakodate City Museum). 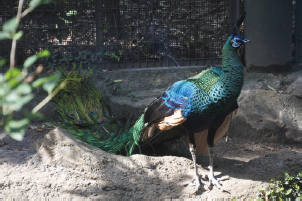 That is probably because of the peafowls. Peafowls are also included in the pheasant family and there are two species: the Green Peafowls (Pavo muticus; 300cm in body length) and the Blue Peafowls (Pavo cristatus; 230cm in body length). Of those, the Green Peafowls mainly had been painted in the Edo period. Distributed in Southeast Asia, relatively close to Japan, they have shining green body, crown feathers standing on their head, and long feathers decorated with a pattern that looks like blue eyes (though often misunderstood, these feathers are not tail but waist feathers). For their large and beautiful images, they are perfect for main subject in the paintings. The flower and bird paintings of Edo period were dominated by the Green Peafowls, and we can see many great works such as “Peacocks” by Maruyama Okyo (MIHO MUSEUM) and “Peacocks and Peonies” (Shuki Okamoto, Seikadō Bunko Art Museum). I personally think this popularity had a bad influence on the Green Pheasant as a subject. They both have similar shining “green” bodies. As a result, if you try to choose one as the main subject, it works in favor of the more glamorous Green Peafowl. The Green Pheasants had no choice but to spend an unhappy time away from the limelight.

However, this situation changed completely with the internationalization of Japan after the end of Edo period. As foreign trade flourished, many Blue Peafowls in South Asia were brought into Japan. The Blue Peafowls have shining blue bodies and look even more glamorous than the Green Peafowls. This probably matched the taste of artists and painters of the time. The beloved Green Peafowls were forced to be retired from the role of main subject in the flower and bird paintings, and the position was replaced by the Blue Peafowls. This change also influenced the status of the unhappy Green Pheasants. They took the “green position” instead of the Green Peafowls, and appeared frequently in Japanese paintings after the Meiji era. Seitei, a popular painter in the Meiji era, also drew many Green Pheasants, probably because of this new wave.

Furthermore, I think Seitei had his own intention in painting the Green Pheasants. He painted many Japanese birds such as the Green Pheasants, while there are not many works depicting foreign birds including peafowls. Perhaps, Seitei became more conscious of “Japan” under rapid internationalization of Japanese society. Seitei was the first Japanese painter to visit Western Europe. It is natural that people become conscious of their own country more after they actually see other countries. This might have happened to Seitei as well, and he preferred Japanese birds to paint. Japanese Green Pheasants, not the peafowls or the Golden Pheasants, must have moved Seitei’s heart. Seitei’s Green Pheasants are an icon of the internationalization of Japanese society at the Meiji era, and at the same time these represent how deeply he is attached to Japan.