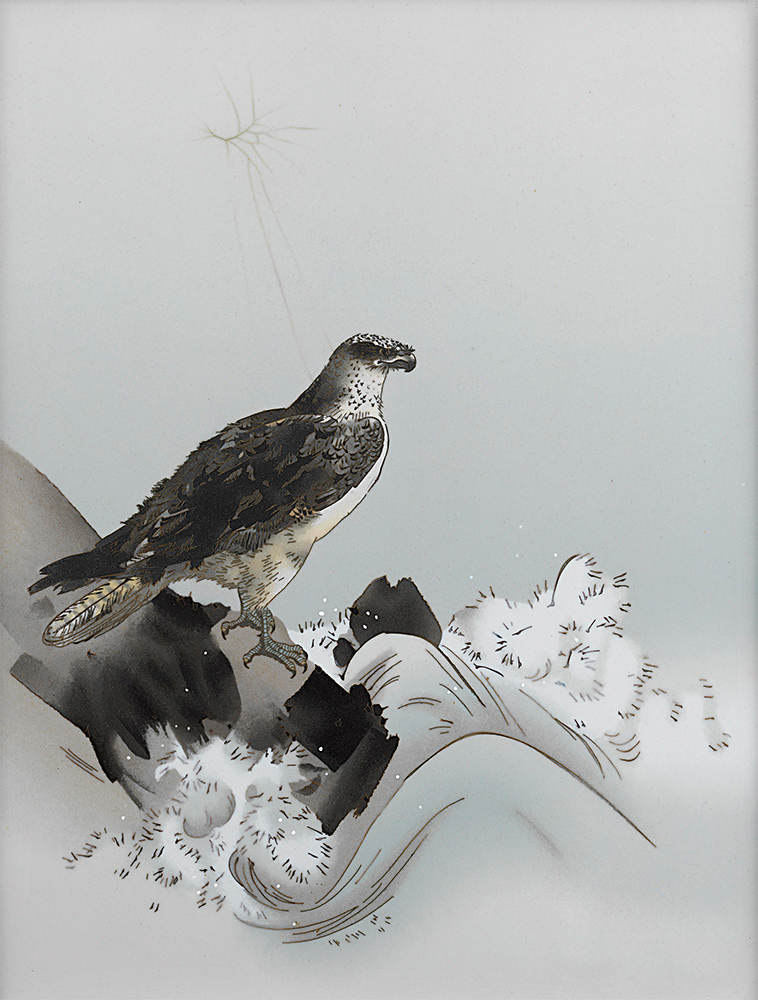 vol.32 Choosing a Bird to Paint for a Rocky Shore: Cloissoné Enamel Painting by Namikawa Sōsuke Decorated with Waves and Osprey Design by Watanabe Seitei

Osprey are fish-eating birds of prey that inhabit the world’s coasts, rivers, and lakes. Their hunting process begins by hovering above waters in search of fish, plunging in feet first to grab prey, then flying away. Unsurprisingly, their dynamic hunting process has been the subject of great fascination to many bird-lovers and photographers. Moreover, because their wings are thin and elongated, and most of their crown, abdomen and their underwings are white, they do not look like a typical avian predator and, from below, they look like gulls. Their behavior and appearance are unique among birds and forms a great part of their charm.

Surprisingly, to my knowledge, there are very few Japanese paintings of Osprey. Hawks and eagles are frequently depicted in traditional bird-and-flower paintings, but I do not remember encountering osprey. Seitei, however, has depicted the osprey in this work, “Seitei Album of Bird and Flower Paintings: Ni no Maki, Misago” (Published by Okurashoten) and “Album of Bird, Flower and Fish Illustrations: Eagle in a Tree” (Metropolitan Museum of Art). This is rather unusual, and Osprey have remained a highlight of his bird-and-flower paintings.

“Eagle in a Tree” ca. 1887
The Metropolitan Museum of Art

When compared to the real bird, Seitei’s Osprey has a much sterner expression, however, its details, like its white crown, yellow eyes, bluish legs and striped tail feathers, are very realistic. One remarkable detail to note is his ability to capture the scales on their legs. In addition to their sharp claws, Osprey have functional rough and pointed scales that grips slippery fish in water. Seitei’s Osprey have large and rough scales on their legs, and the underside of their toes appear very rugged and sharp. It’s likely that Seitei closely observed Osprey and felt particular about conveying the details of their scales.

Having said, this Osprey is depicted in a rather unrealistic environment. In this work, an Osprey perches on a rocky shore near waves, but this scene is almost completely unfeasible. After all, Osprey are not waterfowl, so they cannot float on water for long periods nor even swim. As such, to avoid contact with waves, they tend to perch on rocks and trees high above water level. They might go to the beach to take a bathe, but only when there is a low tide. In other words, it would be completely against their nature to be in a place where they will be washed by waves.

Why did Seitei depict the Osprey in this situation? Conversely, what did other painters paint instead of Osprey? It’s an impossible question, but I’d like to find out as much as I can.

Seascapes (the sea, waves, and the rocky shore) has always been a key Japanese painting motif. Throughout these seascapes, plovers, gulls, and cormorants are depicted most frequently. In particular, cormorants (like the Japanese Cormorant and the Great Cormorant) are often seen illustrated in Japanese paintings and you can easily name a famous piece from each period, i.e., Miyamoto Musashi’s “Cormorant” (Eisei Bunko), Yuhi’s “Waves and Cormorants” (Tokyo National Museum), Kawabata Ryushi’s “Naruto” (Yamatane Museum of Art), and Ono Shigeyuki’s “Cormorants” (Miyazaki Prefectural Art Museum). As true waterfowls, cormorants are skilled divers and, since they can be in contact with waves, you’ll often find them on rocky shores. In the aforementioned paintings, cormorants are depicted resting on a rocky shore, which is ornithologically correct.

To my knowledge, Seitei has never painted a cormorant. Usually, Seitei does not tend to paint seascapes, however, in this work, Seitei did so by painting not the usual cormorant but Osprey. Despite its ecological incorrectness, I believe Seitei chose Osprey for substituting a cormorant.

Why didn’t Seitei paint a cormorant? One reason might be because of its lack of color. Cormorants have a whiteish face, yellow mouth and bright green eyes. However, the majority of its body is mostly black (although, if you look closely, you’ll notice some bits of blue and green) and, while this color scheme suits monochrome sumi-e (ink painting), it’s very unfit for multicolor painting. Another reason might have to do with its unpopularity. Generally, you wouldn’t describe cormorants as well-liked. Not to mention, I believe the more of a bird-lover you are, the less likely you are to like cormorants (there are, however, a few enthusiastic cormorant lovers). As such, one reason why Seitei did not choose to paint the cormorant might have to do with his bird preference. On an added note, like Seitei, I, too, don’t really like cormorants.