vol.11 The most painted bird in Japanese paintings: flowers-and-birds Painting

According to our research, the bird most painted in Japanese paintings is the Tree Sparrow (Oyama & Takahashi 2012). Tree Sparrows (Passer montanus) are widely distributed throughout the Eurasian continent. Although they live in the forest in Europe, they have lived close to humans in East Asia. They are the most familiar bird for Japanese so artists and painters might have more opportunities to see them. In addition, for their familiarity and popularity, they have played leading roles in ﬂowers-and-birds paintings, and since they live everywhere both in urban and rural areas, they could also have played a supporting role in the landscape paintings. For these multiple reasons, I believe that Tree Sparrows have become the most painted bird in Japanese paintings. 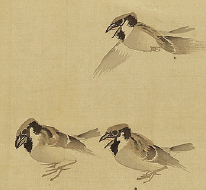 Japanese artists, in diﬀerent periods, have painted sparrows in their own styles. Itō Jakuchū painted many sparrows ﬂocking together around foxtail millet in “Autumn Millet and Sparrows” (Museum of the Imperial Collections). In “Sparrows”, Nagasawa Rosetsu painted some sparrows expressively. Takeuchi Seihō painted some sparrows playing on the ground in “Joy Sparrow” (Yugawara Museum of Art), and Fukuda Heihachirō painted a simpliﬁed illustration of sparrows ﬂying in a bamboo forest in “Bamboo and Sparrows” (Menard Art Museum). Thus, there are too many Japanese artworks with Tree Sparrows to count even only in the list of masterpieces.

In order to paint sparrows realistically, there are a few points to keep in mind. The ﬁrst is the balance of the body and each body part. Tree Sparrows have quite a good physique: they are round and chubby. Compared to the Japanese Bush Warbler (Horornis diphone) or the Japanese Tit (Parus minor), which are similar in body length, sparrows are about 1.5-2 times heavier. Because of their relatively large head, they look about 3.5 head high. They have a thick and short beak and their legs are thin but very short. Secondly, although it is easy to overlook, Tree Sparrows have surprisingly complicated color patterns despite their subtle color in appearance. The head and back are dark brown and the abdominal is white. But if you look at the details, there are also round black spots on the white cheeks and a black line at the throat. There are black and white horizontal lines at the top and middle of the wing as well, and the primary ﬂight feathers have two light brown horizontal lines. Thus, there are ﬁne patterns on each part of the body, and all of them make the “Tree Sparrow” . These two features are the key points to paint sparrows realistically. 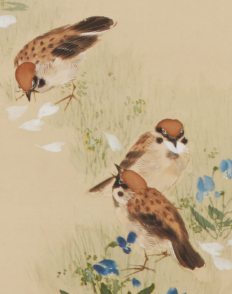 With these points in mind, let us look at Seitei’s sparrows. The colors and patterns are painted very accurately in Seiteiʼ s works. Not only the black spots on the cheeks and black line on the throat, but also the two black and white horizontal lines on the wings are well painted, and this can be seen only in Seitei or Takeuchi Seiho’s works. Some of Seitei’s sparrows even have the horizontal lines on the primary ﬂight feathers that are rarely painted in other works. In addition, there is a sense of realism even in the parts without patterns. For example, the sparrows’ abdomen is usually a slightly soiled white color (not so clean and beautiful). While there are very few painters who illustrated to that accuracy, Seitei paints this realistically with exquisite gradation, and expresses the sparrows’ softness.

Seitei tended to illustrate a sparrow’s head slightly smaller, while other artists exaggerated the size of the head. This is probably to make it easier for viewers to understand the sparrow’s characteristic shape as described above. Seitei respected realism and disliked exaggeration. His sparrows are indeed ornithologically real, however, Seitei seemed to focus too much on the details and lost the sense of the viewer. Some of Seitei’s sparrows are far from the typical image of Tree Sparrows.

In conclusion, it can be said that Seitei’s sparrows, good or bad, are all realistic. However, unusual for Seitei, there are some works that are not so real. Especially in this work, compared to other works, the depiction of sparrows is simple and quite deformed. The head is quite large, the tail is a little short, and the black spots on the cheeks are small. Perhaps because of this, we can see a sort of “cuteness” in the sparrows with the scattered petals of cherry blossom and modestly blooming ﬂowers of violet, instead of the “wildness” . Even for Seitei who emphasized on realism, there must have been times when he was conscious of “cuteness”.

The museum introduced in this essay