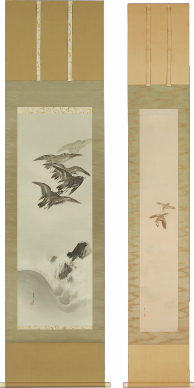 Do you know a Japanese traditional mascot called “Chidori” ? The mascot is a triangular shaped bird with three points of the head and two wings, or can be diamond shaped including the tail. It has a large head with short beak and round eyes, and two legs sticking out from its buttocks. Fluffy and cute, it is almost like a chick. Some says that the mascot has been used as a traditional Japanese pattern since 8th century, Nara-era (though the details of its design may have changed over time). It is still popular and often used as a pattern of Japanese traditional clothes (kimono) and accessories today. They are usually painted in groups rather than alone, and the most common pattern is “Hama Chidori” ; mascots painted with wave patterns.

In ornithology, “Chidori” mainly refers to small-sized plovers (large-sized plovers such as Grey-headed lapwing and Northern lapwing and medium-sized plovers such as Grey plover and Pacific golden plover are generally not included). They have a big head with large eyes and short beak, and a well-proportioned body with long wings and long legs. It looks nothing like a mascot “Chidori” but it is cute as well. Three species (Little ringed plover, Long-billed plover, Kentish plover) breed in Japan, and others are migratory birds that are only seen in the spring and autumn. They live mainly at waterside and scurry around to find foods such as small animals. Although the Little ringed plovers are abundant and often seen in various environments, the Long-billed plovers live on gravel lands in the middle of rivers, and the Kentish plovers inhabit mainly natural sandy beaches: these latter two species are not so many. They all have very similar figures, and the Little ringed plovers and the Long-billed plovers in particular almost have the same color pattern making them difficult to distinguish.

In traditional Japanese paintings, plovers are one of the classic subjects. At times, they are painted as a mascot in an abstract form as in “Cherry Trees and Kerria Plants” (Tawaraya Sōtatsu, Tokyo National Museum) or “Famous Views of the 60 Provinces – Rough Sea at Naruto in Awa Province” (Utagawa Hiroshige). At other times, they are painted realistically as in “Mount Fuji with Plovers and Mount Tsukuba with Egrets” (Suzuki Kiitsu, private property). However, “Chidori” in Japanese paintings are not always ornithological “right Chidori” , plovers. For example, small shorebirds flocking on the beach usually include many species of sandpiper. Some species (such as the Dunlins and the Red-necked phalaropes) make a horde, but plovers often live in small groups or alone. Therefore shorebird’s flock in paintings are usually sandpipers, not plovers. For example, in “Waterfowl by Snowy Shore” (Kanō Sansetsu, private property) and “Illustration of Plovers” (artist unknown, Kanazawa Nakamura Memorial Museum), judging from the birds’feather colors and flocking style, they are probably sandpipers.

“Bird painter” Seitei also drew several plover paintings. His big sales point is his highly realistic style, so his “Chidori” is not “mascot plover” but “realistic plover” . The style in each of his plover works, however, is very different, and it is sometimes hard to imagine that they are from the same artist. Let us now compare two different works.

In the first work “Plovers” , five flying plovers are painted. Each feather on their wings is painted accurately one by one, and the head color pattern and eye-rings are also well painted. From the pattern on the face and the length of the beak, they are probably Long-billed plovers. At the bottom of the drawing, we can see the spray from the stream of water breaking on the rocks. The spray looks almost like big waves of the sea, but if the birds are Long-billed plovers, it might be from a river with a rapid stream. This is an extremely realistic work only possible by Seitei.

On the other hand, the second work “Birds and Flowers” , unlike many of other Seitei’s works, is deformed. The theme and composition are very similar to the first; two plovers fly upon water flow. However, each plover is painted as an equilateral triangle with three points, its head and two wings, and two legs stick out from its buttocks. This pattern is more like “mascot plover” rather than “ornithological plover” . The details of feathers in the wings and tail and the scales of leg are realistic, but the overall form and body balance are not realistic. Perhaps Seitei intentionally drew a “mascot plover” realistically. It shows a certain strangeness as a “real” Mickey Mouse would.

Interestingly, there is a painting in intermediate style between these two. “Plovers and Moon” (Yamatane Museum of Art) has Little ringed plovers or Long-billed plovers which are not as realistic as “Plovers” but more real than “Birds and Flowers” . The diversity of Seitei’s work style may demonstrate wideness of his artistry: his paintings are not necessarily restricted to the realistic style.